Never (ever) a Dull Moment

This morning was drizzly so instead of the park I decided to load the girls in the car and make the trek to Target, a 20 minute drive on a good day (1 hr plus on a bad one). The trip was great, we got everything on our list (and oh so much more.) It was also a chance to try out the new backpack carrier we got for Ginger - she loves it in there where she can supervise, pull my hair, and fall asleep, all of which she did. 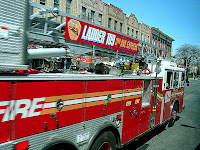 blocked off by about ten fire trucks and ambulances, a fire ladder up to the roof of my building, reporters and groups of people all around.
Interesting.
I parked across the street, loaded a sleeping Hazel into the stroller and Ginger in the backpack, and came over to a group of people I recognized as co-tenants, to find out what the deal was, small pit forming on the extremely unlikely chance my apartment was the source (or victim, as it may be.)

Turns out the old man from the 5th floor who sits in his lawn chair on the street corner every day, smoking a big ol' stogie, decided to do the same inside because of the rain. Rumor has it he fell asleep smoking, and that was that. Luckily people smelled smoke, called 911 and evacuated, and the fire damage was mostly contained to his apartment. Consequent smoke and water damage, however, will affect several others.

We weren't allowed back inside yet, so I stood around with my neighbors waiting for news and glad Hazel was sleeping and the drizzle had let up. After 20 minutes or so we could go in, but not the 5th or 6th floors as they were still clearing out smoke. A man from my floor, Frank, came over to tell me I was going to need locksmith services. They had gone around knocking on doors to get people out. When no one answered at mine, they busted in with a sledgehammer to make sure no one was home. I thanked him profusely for being so thorough - I have no problem dealing with a broken lock and door, considering the alternatives.

I went in and hung out at a friend's apartment for another 20-3o minutes until I could go up to the 6th floor. Hazel finally woke up, having missed all the lights, ladders, firemen and excitement, but surprised to be in an apartment she'd never seen before. When we came up to our floor, there was glass everywhere because they had broken the hall windows to let smoke out. Frank was up there, and helped me carry the girls and then the stroller over the glass and into our place. The door was definitely bent out of shape, and there was a thin haze and smell of smoke, but we opened all the windows and started to air things out.

The building insurance appraiser came by a little while ago to take pictures of the door - she said they'll get me some kind of temporary lock (update: ghetto padlock) and then have the door and maybe frame replaced.

I saw a reporter and photographer at the scene so if there's a news article anywhere about it later I'll post a link. I don't know what I'll do for blog material when I leave New York. I may have to close it out! I don't make this stuff up, there's always plenty that just happens.
Posted by Disco Mom at 5:08 PM

What an exciting afternoon!!!! I'm glad not too much damaged happened!

Glad you weren't around - that would have been freaky to be inside and smell the rising smoke.

My goodness, Kari!! I've been periodically checking your blog ever since you commented on mine...Clint says hi, by the way. Your girls are adorable! And, no fair, you look exactly the same as in college. ;)

Groove is in the Blog 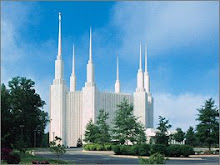 Weekly YouTube videos about our basic beliefs and gospel-centered messages.